A friend and I are planning a camping trip, and I offer to bring along a couple of Dutch ovens and man the kitchen. With a blank look, he says, “Um, what is a Dutch oven?” Maybe you know how he feels. Read on.

As used in the world of camping and outdoor cooking, a Dutch oven is a thickly cast pot — usually of cast iron if you know what’s good — with a snugly fit cover. Properly heated with a campfire or charcoal, a Dutch oven is suitable for boiling, baking, deep frying, steaming, roasting, or grilling just about anything you wish to cook.

The secret to the Dutch oven’s flexibility is mainly in its construction. The thick cast iron body helps to ensure even heating all around the food inside, and the snug-fitting lid keeps heat and moisture trapped inside, where it works efficiently to cook food at a consistent temperature.

As it happens, almost any pot with a lid can be called a Dutch oven. For example, Amazon sells various beautifully enameled lidded pots, often made of cast iron, for use in the home oven. But these are too fragile for outdoor cooking. Lots of other lidded pots are sold as Dutch ovens, too.

But a few key features allow a Dutch camping oven to live up to its name as an “oven.”

Not Just Any Old Bean Pot

Any old bean pot can handle fire rising from below it. But to get beyond boiling and frying, you must bring the heat in from all directions. This is where the camping Dutch oven’s flanged lid comes into play, allowing burning coals to be arranged on top of the lid without falling off. With the heat coming from the top and bottom, Dutch oven cooks can bake, broil, and roast at a campsite just as they would in a home oven.

The other critical feature of a Dutch camping oven is the ability to lift it just a hair’s breadth above the burning coals below it: a true camping Dutch oven has legs, almost always three of them, about an inch-and-a-half long, cast as one piece with the body of the pot. This allows the pot to sit close enough to get the maximum heat from the coals without creating hot spots from direct contact or smothering the coals by pressing them into the ground.

Next time your friend offers to bring one camping, don’t bother asking him, “What’s a Dutch oven?” 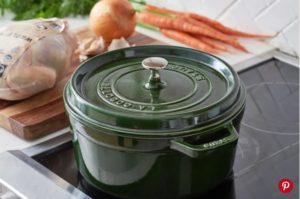 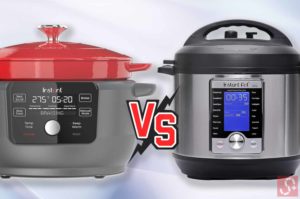 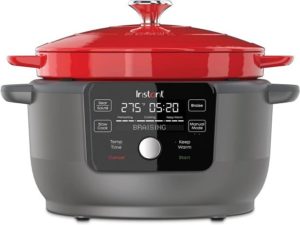